I just loved Charlie Chaplin’s The Circus. I’d never heard of this film, but recently saw that The Criterion Collection had just released it on DVD. In this 1928 film, The woebegone Tramp mistakenly gets caught up in a police chase for inadvertently taking a man’s wallet. The crazy chase that ensues leads to the Tramp bringing down the house as an accidental clown act at a circus.

This circus is run by a nasty, hothead Rimgmaster who continually abuses his lovely, innocent step-daughter. The Tramp soon falls for her and tries to be her savior, but she soon falls for a dapper tightrope walker.

Throughout the film we’re treated to marvelous scenes including a chase through a house of mirrors, accidental clown acts that have the audience laughing in the aisles, a scary standoff with a lion and a death-defying tightrope scene.

Charlie Chaplin’s 1928 Academy Award®-winning silent film “The Circus” stars Chaplin as a tramp who falls in love with a circus owner’s acrobatic daughter. At the first Academy Awards® presentation on May 16, 1929, Chaplin was awarded the special statuette for “versatility and genius” in acting, writing, directing and producing “The Circus.” Restored by Nick & jane for Dr. Macro’s High Quality Movie Scans Website: http:www.doctormacro.com. Enjoy!

According to the commentary Chaplin didn’t like this film much because it was made at a time when his life was at a low point. His wife was divorcing him for his affair with the female lead, his mother was terribly sick. a storm destroyed most of his set and the tabloids where having a heyday gossiping about Chaplin’s personal life.

Nonetheless, The Circus is hilarious and often poignant. It entertains from start to finish. I’d say it deserves a place beside any of Chaplin’s classics from The Kid to City Lights.

Directed by Mikio Naruse, Every Night Dreams is a haunting, poignant silent  film about a young mother named Omitzu, who was deserted by her shiftless husband and pays the bills by working in a hostess bar. Omitzu is able to turn on the charm as she flirts and smokes with sailors passing by inviting them to the bar where she works. The owner realizes that it’s Omitzu’s charisma that brings in extra customers.

Omitzu’s neighbors tell her that a man has been coming around looking for her. She’s puzzled. The next day they say it’s her husband and Omitzu yells, “He’s our enemy!” The neighbors are shocked and try to convince her not to be so bitter. Give him a chance; be a family again. And so she does.

The husband returns, but can’t find work. He tries in his slow poke way, but to no avail. He urges Omitzu to quit her job and she’d love to be a housewife, but since the husband is just one more mouth to feed, quitting is out of the question.

Back at the bar, a sea captain wants Omitzu and while she’s able to handle most maneuvers, this man’s clout and impulses take the situation to a boil (though not in a modern Matt Lauer sort of style, the film’s PG not R).

Pressures build from their lack of money. Their boy, whose performance is so sweet and natural, needs medical attention, highlighting how the father’s unemployment has just made matters worse for all of them.

The film is beautiful and Naruse made me sympathize with all the characters. Omitzsu is a complex woman who doesn’t fall into one of society’s category’s of Madonna or tart. She’s pragmatic and faced with poor choices.

Harold Lloyd’s 1927 film Speedy is a comic delight. Speedy is hero’s name. Lloyd’s Harold “Speedy” Swift is in love but can’t hold a job for more than a few days so his sweetheart’s grandfather, her guardian, won’t let them marry. We see him lose a couple more jobs through no fault of his own.   His fanatical love of baseball cost him his soda jerk job and luck just wasn’t on his side when he tried to drive a taxi with Babe Ruth as his first and only customer.

Despite his poor job record, Speedy takes his girl to Coney Island, where a slew of mishaps continue.

His sweetheart’s grandfather owns the last horse-drawn car (i.e. a tram driven by a horse when cars and buses have taken over the streets). A railroad tycoon wants to buy him out to replace the old horse-drawn conveyance with his railroad line. After reading about the railroad deal in the paper, Speedy changes grandpa’s requested amount from $10,000 to $70,000, which the big shot who’s come to negotiate with grandpa outright refuses.

Thus the railroad man plots to prevent grandpa from completing his route. If he misses a day, the railroad can take over the route without paying grandpa anything so the shrewd tycoon hires a bunch of thugs to stop grandpa. Speedy happens to overhear the plan and volunteers to take over as the driver. Since Speedy’s batted 0% as far as his jobs go things look bad.

The film is full of sight and physical gags that amaze. How did they do these stunts? Considering how they sometimes used real streets and had to orchestrate massive, chaotic scenes with hordes of extras and animals, it’s incredible and still entertains.

Finally I found time to watch a movie, albeit a short one that I watched in short stints as I ate lunch this past week.

Steamboat Bill, Jr. starred Buster Keaton as a long lost, disappointing son of a steamboat owner. Steamboat Bill. Sr. owns an old steamboat that gets condemned shortly after Mr. King, a local tycoon with a splendid new boat muscles into town. Bill’s son, whom he hasn’t seen in at least 20 years comes to town and the rough, salt-of-the-earth father is totally disappointed with his light-weight, citified son.

To make matters worse, coincidentally, the son’s sweetheart turns out to be the daughter of the tycoon, who so hates Bill.

Lots of slapstick ensues. While I could appreciate the acrobatics and the technical precision in the film, I wished for more–more like the social commentary Chaplin would have included. The DVD I had had a few extras, but I missed the audio commentary that many Criterion Collection films have. It wasn’t a bad film, but it could have been better.

Yasujiro Ozu’s Passing Fancy (1933) takes us into the shitamachi, i.e. tenement neighborhood of Tokyo where factory worker Kihachi, a widower, lives with his young son, Tomio. The film opens with Kihachi watching a storyteller with his neighbors. The scene with Kihachi battling a fly are comedic. After the show, Kihachi meets Harue, a young, pretty woman who’s just last her job and has no where to go.

Not only is Kihachi moved, he’s smitten. His young neighbor Jiro kids Kihachi urging him not to get his hopes up. A lazy, uneducated jokester, Kihachi’s amusing, but you know he’ll never get ahead. Moreover, you know he’ll never get the girl. His hopes die hard. He’s unaware of Harue’s soft spot for Jiro, who rebuffs her advances. Still her continued love for Jiro means she’s never going to fall for Kihachi.

Tomio’s a good student and impudent son. His classmates taunt him and in turn, Tomio puts down his father for his illiteracy and lazy ways. The argument escalates, but Kihachi realizes his son’s situation and gives a lot of money to spend as he wishes. He hopes the windfall will alleviate the pains of their poverty however briefly. But Tomio, who’s about 9 or 10, gorges himself on sweets, which results in a critical illness. With Tomio in the hospital Kihachi, Jiro, Harue and another neighbor are brought together.

It’s never explained why Tomio’s got the eye patch

The silent film moves slowly by modern standards, but is full of touching scenes that will reward patient viewers. Ozu’s characters are engaging. I particularly liked that the boy was sometimes the model son, who has to make his drunken father get up for work, sometimes a victim and sometimes a brat. It isn’t often that children are so multi-dimensional in film.

As part of my New Year’s Resolution to watch old films, I saw Charlie Chaplin’s The Gold Rush, which charmed me. As with the other Chaplin films, The Gold Rush offers charming little moments, moments when the tramp is under-appreciated, forgotten or forlorn, but carries on in spite of his troubles. He’s always forging onward even when the deck’s stacked against him. He’s a beautiful loser in a way that harkens to Chekov.

The film contains memorable scenes where Chaplain’s Lone Prosector hilariously defies bad luck. He’s come to the Yukon to seek his fortune, but like many all he finds is hardship (till the very end of the film). He’s cold, lonely and hungry through most of the film. With hundreds of other the Lone Prospector treks a great distance at the start of the film out onto the tundra. It’s a grand scene as are the scenes when the cabin is about to fall off the mountain.

From the Criterion Collection audio, I learned that the shoe shown at the top of the page is made out of candy. Some of the films funniest and most poignant scenes surround food and hunger. The tramp, here called “The Lone Prospector,” faces hunger out on the Yukon tundra. There are classic scenes in which the Lone Prospector’s pal Big Jim is so hungry he imagines the tramp is a chicken. (This narrated version was released in 1942 and Chaplain himself is narrating.)

As you’d expect the Criterion commentary is superb and you’ll learn a lot about the production and Chaplain’s meticulous rehearsing and his romantic relationships with his actresses. 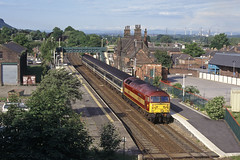