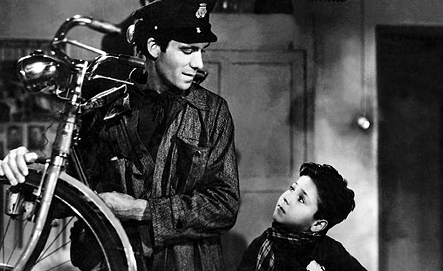 I’ve heard that Bicycle Thief is a classic film but never saw it — till now. I got the DVD, and see that the title’s been correctly translated to Bicycle Thieves, which makes more sense. (Bravo, Criterion Collection!)

I wasn’t sure what I expected, but I didn’t expect the emotional power this simple movie packed.

In a nutshell, Bicycle Thieves shows the poverty of post-WWII Italy. Many men stand in line for job opportunities. Only a couple will get anything. Since he has a bicycle, Antonio Ricci is lucky enough to get a job putting up posters. He must have a bike. The first problem is that his bike has been pawned. It recoup it his wife Maria pawns the family’s sheets, sheets they got as wedding presents. Since this job will pay well and steadily and since there’s nothing else of value, pawning the sheets seems sensible. Though I did have a feeling of apprehension as soon as they got their money.

Antonio uses most of the money to recover his bike and starts work. As the title suggests it isn’t long before some ne’er-do-well, someone just as needy as Antonio steals the bike. The rest of the movie is the search for the thief and the bike. While it seems like little can be done with such a simple problem, director DeSica presents a journey through impoverished Rome that breaks your heart and shows you the self-absorbed rich, the dangers of pedophiles, the ties between a father and a son and the longing for better by people who’re more than willing to work for what they get.

The ending is particularly moving and well earned. The emotional journey we’re taken on is real. As a neo-realistic film Bicycle Thieves portrays life as it probably really was for many. I could definitely watch this again and again.

Bear in mind that South Korea was one of the poorest countries in the 1970s and now it’s neck and neck with Spain.

In I got a good tip from The Atlantic Wire’s email today’s on a good piece in The N.Y. Times:

The fact that “American capitalism as currently constituted is undermining the foundations of middle-class society” shouldn’t be up for argument, Krugman writes. “But it is, of course. Partly this reflects Upton Sinclair’s famous dictum: It is difficult to get a man to understand something when his salary depends on his not understanding it,” Krugman argues. “I’ve noted before that conservatives seem fixated on the notion that poverty is basically the result of character problems among the poor. This may once have had a grain of truth to it, but for the past three decades and more the main obstacle facing the poor has been the lack of jobs paying decent wages. But the myth of the undeserving poor persists, and so does a counterpart myth, that of the deserving rich,” he writes. Americans are wealthy because they made the right choices, the story goes. “But the main thing about this myth is that it misidentifies the winners from growing inequality. White-collar professionals, even if married to each other, are only doing O.K.” It’s the top 0.1 percent that are growing in wealth. The Washington Post’s Greg Sargent tweets, “Nice takedown of David Brooks’ latest on inequality from @NYTimeskrugman (without ever mentioning Brooks’ name).”

The full editorial is here.

Often people compare a government‘s budget to a family budget. It’s sort of an easy, automatic thought. “If  I have to live within my means, the government should.”

Yet if you think it through that is just poor thinking. Your family has no or little defense spending. Maybe you’ve got an alarm service, but you don’t need to wage war. If you want to, you can donate to a charity, here or abroad, but if you don’t what are the repercussions? Zip. Don’t compare your kids’ piano lessons or science fair project expenses to the NEA or scientific research.  How many employees does the average family have? The government has a lot more budget items. Period. End of story.

Your number and type of dependents differs immensely. The average family has something like 2.2 children. Not millions and you choose that number pretty much. The government can’t choose how many poor people there will be in the same way.

Our government does pay its bills, just like most families pay their’s. Actually, it’s probably a lot better at doing so.

Also, so many people conveniently forget that credit card debt isn’t the only debt a family has. Factor in the mortgage and car payments and most families, respectable, hard-working, All-Americans have a lot of debt. And they get a break on their taxes for some of that debt. Who subsidizes the government for getting in debt as a form of behavior reinforcement?

So can we just stop using this poor analogy? Probably not. It’s quite ingrained and handy for those who don’t like to think anew.

Here are some articles that address this very issue: 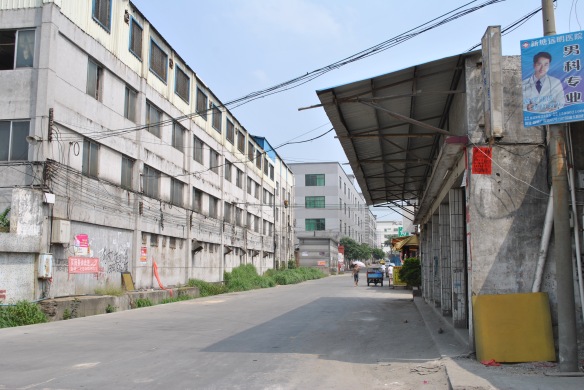 Outside the gated community 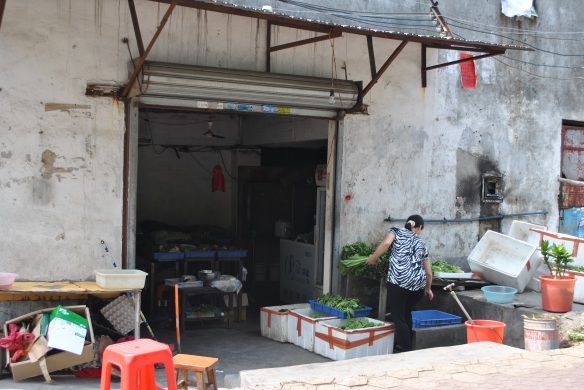 I live in a gated community with lots of high rise condos and lush landscaping. Outside the neighborhoods look blighted. Dirty, squalid, smelly. Sad as it is, this is one aspect of the “real” China. It’s not my beloved Jinan, but Jinan isn’t the whole story of this changing, complex country.