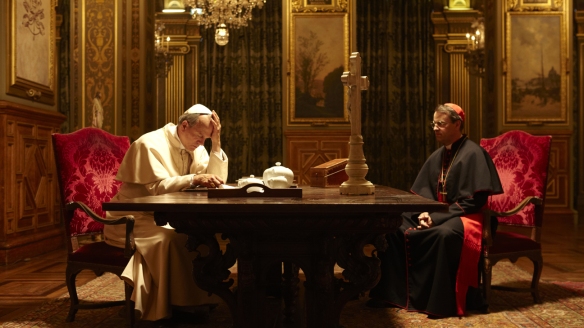 What an absorbing — and true story!

I happened upon The Jewish Cardinal (a.k.a. Le métis de Dieu) at my library and am so glad I did. It’s the story of Jean-Marie Aaron Lustiger, the son of Polish-Jewish immigrants who converted to Catholicism as a boy during WWII. His mother was killed at Auschwitz and though his father isn’t religious, he’s hurt by his son’s conversion and later decision to become a priest.

As the movie starts, Pope John Paul II soon makes Lustiger a bishop and soon a cardinal. Lustiger is real, someone whom people can relate to. He shakes things up and causes turbulence but eventually people see he’s right. For example, early on he sees that the church needs to reach people via mass communication and he starts an archdiocese radio station which he himself broadcasts from.

He also doesn’t like when his Jewish origins are written about as a gimmick or when he’s asked by a high ranking rabbi to deny his Jewish identity.

He often meets with John Paul II in the ’80s when the pope is fairly new. They understand each other and he earns the pope’s respect.

When it’s learned that Carmelite nuns have made a convent in Auschwitz, Lustiger becomes something of a mediator and possible pawn in a conflict that’s both political and religious. He’s savvy enough to broker a fair resolution, but gets betrayed.

The acting is stellar with Lustiger (played by Laurent Lucas) and the actother cast members turning in bold, believable performances. The actor who played JPII carried off the role with great credibility. (He’s not perfect.) The film’s never hokey or preachy, just real and compelling. I’m so glad the intriguing name called to me.