I stumbled upon a quirky, entertaining cooking video.

How to Squirrel-Proof your bird feeder, sort of.

I love Mark Rober’s videos and this was no exception. Mark designs and builds an amazing maze for squirrels to test how hard a squirrel will work to get some tasty walnuts. I have a whole new respect for squirrels.

If I knew engineering school would enable me to make this sort of mischief I would have been all in.

This is far more entertaining tham most TV shows. Trust me.

Each week Cee of Cee’s Photography challenges bloggers with a fun prompt. This week we’re to share photos of taste. I’ve given you a wide range of sweet and savory. Bon Appetite.

What will you choose?

What is a Momiji Manjū?

If we were having coffee, I’d say I had a good Independence Day with just the right amount of celebration, not so much that there’s a frenzy. I marched in the local parade, met the trustees, had a relaxing afternoon before enjoying hamburgers, potato salad, the Capitol 4th Concert and some local fireworks.

I’ve started reading Inspector Singh Investigates: A Most Peculiar Malaysian Murder for a Who-Dunnit book club at the library, which I’ll start to lead with a partner. I’m on for the July meeting next week. I’m on page 42 and the story’s fine, but not gripping. I’ve also started reading Sarah Blake’s The Guest Book for my neighborhood’s new book club. I’ve accepted the role of facilitator. I’m farther along in The Guest Book. I don’t enjoy how it hops between generations. It’s a gimmicky structure and somewhat hard to follow.

I’m enjoying my computer programming class through the University of the People, but the class is time consuming. I do feel I’m learning Python, but I also realize that it would take a couple years of study before one can get paid to use this skill. I’m more in need of something I can learn in six months and get employed doing.

Last night I had a Skype interview to teach in China in Weifang. While I did move on to the next stage, I’m not excited about the job. It seems like another school that’s mainly for-profit. They’re not sure how many students they’ll have. They do have a curriculum, so that’s better than Clark University, my former employer, but who knows how good it is. The Dean is busy and I didn’t speak with him, but he is bilingual and has a PhD from the University of Pennsylvania in accounting. He also has a degree in education.

When I think of the human rights abuses in China–the camps for Uighyrs, the demolition and spying on religious groups, the lack of free speech–I really can’t justify working there again. Who knows what will happen with Hong Kong. The Chinese won’t let them go and won’t let them have their separate system forever. It’s not a country where a teacher can give lessons that allow students to consider the ethics of their president or government. So despite the lure of a full time job with benefits, I’m inclined to say no.

I do wish I had more time to write. I’m excited about a new play idea, but with the computer class and the easy, but time consuming class on online learning, there’s little time to research and write.

How’s your week been?

If we were having coffee, I’d have brought my umbrella because we’ve got storms at least part of everyday. It’s just part so that’s fine by me. I’ve realized that June is a rainy season here.

I’ve agreed to lead two book clubs. One’s reading Sarah Blake’s The Guest Book and the other is reading a mystery, Inspector Singh Investigates . . . . Both meet in July and I’m busy preparing. I can’t say The Guest Book has grabbed me yet. The mystery book is part of a series and I’ve had to order it.

My two classes with University of the People (http://uofthepeople.edu ) are going well so far. I’m really enjoying the computer class which is on learning Python. So far it’s rather simple so I’m not lost. Besides there are so many books and online tutorials that when I need extra help it’s at my fingertips. The other class is on college survival and I don’t need to know how to budget time so my paper’s are submitted by a deadline or any such academic skills.

I absolutely loved watching Auntie Mame starring Rosalind Russell. What an amazing entertainer! What a witty film! If you want a burst of joy, get it.

I did watch the Democrat Debates, which were really not debates, but showcases, which is fine. Short interviews with each would have been more civilized. This was a free-for-all with a poor format. There’s no way I can sit through 9 more of these spectacles. I wish the BBC could moderate.

I attended to wonderful library events last week. First was a class on picnic side dishes given by a witty chef, who offered lots of useful tips on shopping and preparation. Her citrus vinaigrettes were terrific. Out of the 4 dishes demonstrated, I’d make 3. The second was a summer cocktail event. The local mixologist created three light, refreshing drinks. Again, I liked 3 out of 4. I’ll share these recipes soon, so check back.

I like the color themes that City Daily Photo (CDP) is using this year. May’s color is pink. I thought I’d find a few pink photos for this non-CDP blog. Enjoy!

Each week Cee of Cee’s Photography challenges bloggers with a fun prompt. This week we’re to share photos highlighting texture. What textures will you share?
If you want to see more fun, smooth fotos, click here.

I just found these videos where children sample different kinds of food from around the world.

Each week Cee of Cee’s Photography challenges bloggers with a fun prompt. This week we’re to find photos of farm animals. The chicken and goats were seen in my neighborhood in China. In a lot of places, it’s not just farmers who keep farm animals. 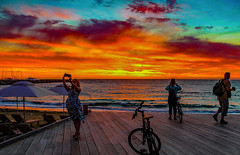