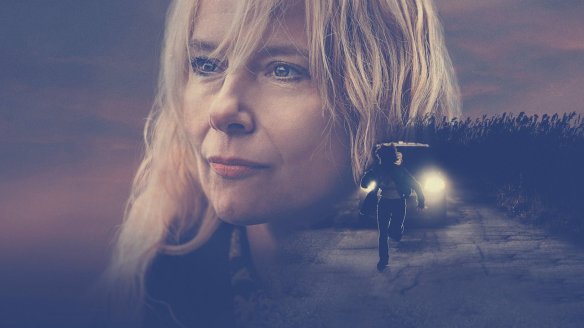 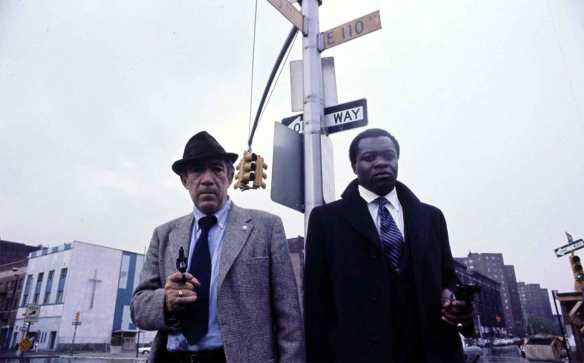 This week I watched the police drama Across 110th St. starring Anthony Quinn as Capt. Mattelli. Made in 1972, Across 110th St. is a look at racial tensions during that era. Quinn plays a middle-aged detective afraid of losing his job to a younger, Black detective named Lt. Pope.

When that movie begins, some mobsters are dividing $300,000 from drug deals when a couple of gangsters dressed as police officers force their way into the apartment the mafia is using. The Black gangsters make off with the cash and the mafia vows to get even. In spite of their icy relationship the police have to get both the mafia and the gangsters behind bars.

Harlem is impoverished with high drug use and other crimes destroying the neighborhood.

There was a lot of brutal violence, which I couldn’t take. Thus I didn’t enjoy the movie and when much have preferred less violence, and more detective work. The theme of racial tension is significant and worthy of our consideration, but I just couldn’t  take the brutality. 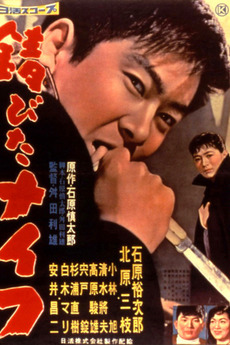 Part of a collection of Japanese noir films, Rusty Knife (1958) packs a punch. A relentless D.A. won’t give up on getting justice for a murder that was wrongly categorized as a suicide. He hunts down two reformed gangsters, who witnessed the murder as other yakuza (Japanese mobsters) killed a city official. One of the witnesses now owns a bar and has turned over a new leaf. However, the guilty and anger towards these gangsters who brutally raped and murdered his true love. As the D.A. urges him, the reformed gangster pursues the yakuza and seeks revenge.

The emotions run high and the plot has some great fight scenes. The plot offers plenty of surprises. I recommend this film and would certainly watch more of director Toshio Masuda’s films. 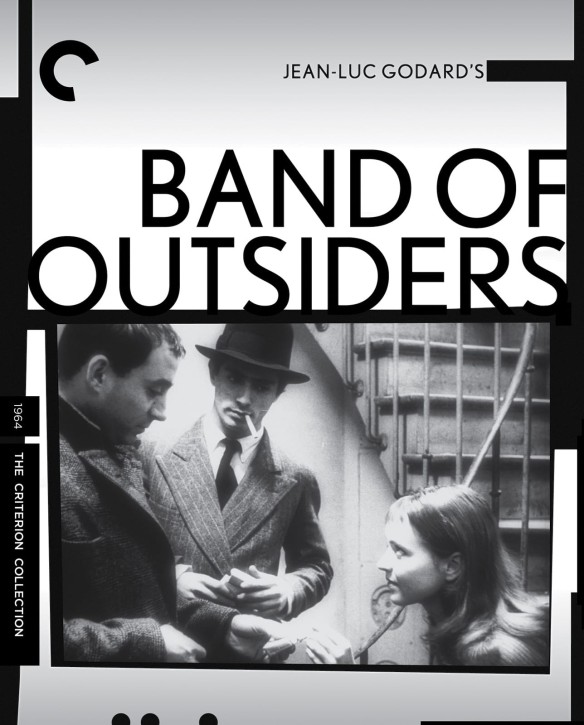 Jean-Luc Goddard’s 1964  Band of Outsiders has gotten under my skin. It’s full of powerful imagery and perplexing characters. Beautiful and naive Odile meets two friends, Arthur and Franz in an adult ed English class. The young men are smitten with Odile, though the Alpha male of the pair Arthur pursues her and leads the trio in a robbery of a man who lives with Odile in her aunt’s home.

I kept hoping that Odile would stop Arthur’s pursuit and look for a better man. She saw that Arthur’s plan was both wrong and foolish, but she continually went against good sense. Arthur isn’t kind to Odile and Franz occasionally stands up for her, but throughout the film Arthur, who comes from a family of boorish gangsters, treats Odile poorly. He’s too selfish to be kind to anyone. He’s a ruined person.

I often winced at the psychology of the relationships on screen. I did understand and feel sorry for Arthur, whose relatives beat him so he’d get them the loot faster. I wondered why Franz couldn’t find a better friend and I understood that Odile was a weak person easily influenced by flattery and attention, but all that was hard to watch.

What saved the film for me was its magical moments. In one scene the trio decides to try to beat American tourist Jimmy Johnson’s record of racing through the Louvre in 9 minutes 45 seconds. Probably my favorite scene was in a café when Odile gets the boys to dance. You see the trio of needy people entangled in an ambivalent love triangle dancing. I can watch this again and again.

Godard’s narration is full drôle commentary. The black and white images are compelling. So despite my quibbles with the relationships, this heist film that’s full of ennui is well worth seeing. 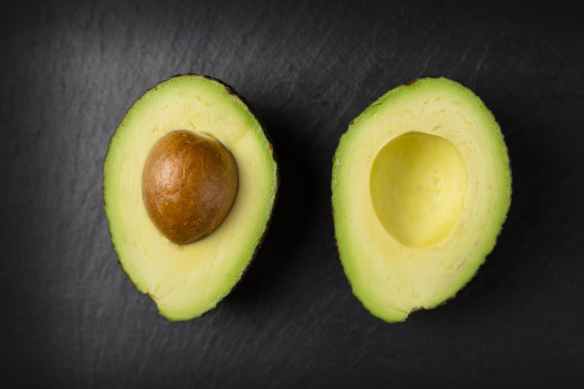 Photo by Foodie Factor on Pexels.com

I heard about this story earlier in the week when Dennis Prager read it on air. Here’s the start and the link to the whole article.

In the past ten years, the amount of avocados consumed in the US has more than quadrupled, to over a million tons a year. Most of this is used to make guacamole, a traditional Mexican food that has now become popular in the United States. While many avocados consumed in the US are grown in California, about 60% are imported from Mexico–where they have sparked a long-running battle between local farmers and one of Mexico’s drug cartels.

In the 1980s, the Mexican state of Michoacán saw good times. The area had long been a center of production for avocados, the fleshy green fruit that is used to make guacamole. Under the NAFTA treaty, the United States lifted its trade restrictions on Mexican avocados, and the region found itself at the center of a growth industry. Michoacán was the only Mexican state approved by the USDA to export avocados to America, and even as the American maquiladora factories that had appeared in Mexico under NAFTA were closed down and moved to China, the avocado industry continued to expand. By 2010, Michoacán contained almost three-fourths of all the avocado plantations in Mexico and was exporting some 80% of its entire crop to the US, worth over $1 billion a year. A single hectare of orchard, yielding two crops a year, could produce as much as $100,000. Farmers began referring to the avocado as oro verde, “green gold”. The fruit was the largest cash crop in the region, outselling even the marijuana trade.

And that caught somebody’s attention. For years, the marijuana industry in Michoacán was run by a cartel known as La Familia, headed by Nazario Moreno, a former minister who quoted Bible verses to justify the kidnapping and execution of rivals and opponents. In 2010 Moreno was killed in a cartel dispute, and La Familia collapsed, leaving a power vacuum . . . (Click here for the rest.)

My brother just told me about this series of short documentaries looking at the tragedy of violence in parts of Chicago. Each focuses on one of the 10 Most Violent Neighborhoods in the Second City. Back of the Yards is number 10.

I live north of the city, but it’s still troubling that others must live in a war zone.

I agree with the reporter that if you don’t understand a problem, you can’t solve it. 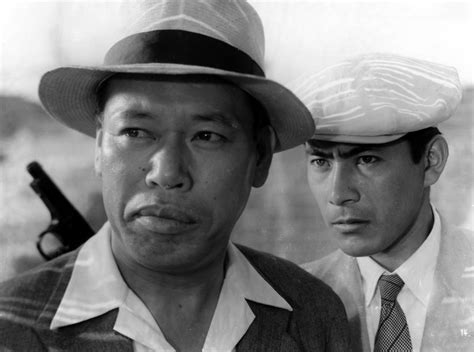 The first noir crime film in Japan, in Kurosawa’s Stray Dog (1949) rookie detective, Murakami, gets his pistol stolen while he’s riding a crowded bus. Humiliated, Murakami (Mifune) takes responsibility for his carelessness and begs his boss to fire him. The pragmatic boss brushes his request away and pairs the rookie with a veteran detective (Shimura) named Sato. The two set out to track down the pistol.

Plagued by guilt, Mifune is obsessed with finding his pistol and disguises himself to search the black markets of aprés-guerre Tokyo. We see the squalor and darkness of these markets (which aren’t quite as bad as the poverty in Dos’ka den). These scenes are beautifully and masterfully shot to show this underworld full of hustlers, prostitutes, bums and drunks.

Aprés-guerre is a term Murakami and Sato discuss at length as Sato notices the difference between the pre-WWII generation and the aprés-guerre generation. A WWII veteran, Murakami expresses his sympathy and understanding for the culprit whom he imagines is a product of a rough society. Yusa, the thief, also is a veteran so Murakami identifies with him and knows how the war damaged the soldiers.

However, Sato tells him that thinking is generational and won’t help a cop do his work. If a cop’s philosophy views a criminal as being without choice or responsibility, the officer just won’t be able to work as he should, Sato asserts. Sato reminds Murakami that he’s chosen law and order, while Yusa’s chosen exploitation and crime. There is a difference, a big one.

As time passes, the missing gun is used in robberies and a murder. Murakami knows the pistol had all seven bullets and the plot becomes a race to get to the gun. In this race, the heroes’ search takes us through Japanese society from local watering holes, to a packed baseball field, to a burlesque hall, to a filthy shanty and to Sato’s simple, loving home. Along the way we’re treated to Sato’s wise practice.  It’s fascinating to see him deal with each subject, be it a showgirl or a pickpocket, with just the right approach. His understanding of people makes chasing and shootouts unnecessary. 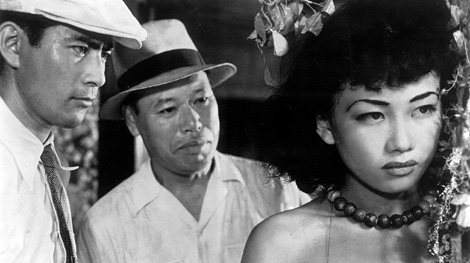 I learned about Stray Dog from the commentary feature with the Drunken Angel DVD. Mifune and Shimura starred in Drunken Angel. Here they both play completely different characters. Mifune moves from angry gangster to exemplary rookie cop and Shimura shifts from righteous drunk doctor to wise, veteran cop. Another pivotal performance was given by Keiko Awaji, who plays a showgirl, an uncooperative witness. In the extra features, Awaji explains how she didn’t want to be in this or any film. She wanted a career in operettas, but she got talked into this role. She was terribly pouty and unpleasant about the filming process and this difficult attitude made her performance work.

I never intended to get into Japanese films as much as I have. I now have been so impressed with the performances that it’s clear that it’s high time I learn the names of these actors.

Here’s a compilation of Mifune’s performances: