Thanks to Sharon for bringing this unique documentary to my attention. Directed by Crystal Moselle, The Wolfpack (2015)shows a family consisting of six brothers, their parents and their sister who live in New York. The parents met when the mother went backpacking in South America. She shared his dislike for materialism and were married.

The sad and curious thing about this family is that the father became a control freak and would lock the wife and children in the apartment. He believed it was for security, but actually I saw it as a form of control. They could only go outside when the father permitted it and he apparently went with them so no one could escape. One year they were allowed out 9 years and another they weren’t taken outside at all.

The film focuses on the older brothers. The mother was certified by the state to homeschool the kids and they all spoke articulately and politely. The father had wanted 10 children as his dream of heading a tribe, but seven was the limit (biologically) for the mother. The father didn’t work; the father explained that he didn’t believe in work. I wondered what he did when he was out of the house for hours and hours. They family lived on welfare. The father dreamt of moving to Scandinavia, where the welfare was even better, but that never materialized.

The compelling thing about the documentary is how creative the boys were. To stave off boredom and keep sane, they watched the 5000+ DVDs that their dad had collected and then they’d copy the scripts and act out the films. They made clever props. It’s a good thing there were so many kids or they wouldn’t have enough actors.

END_OF_DOCUMENT_TOKEN_TO_BE_REPLACED 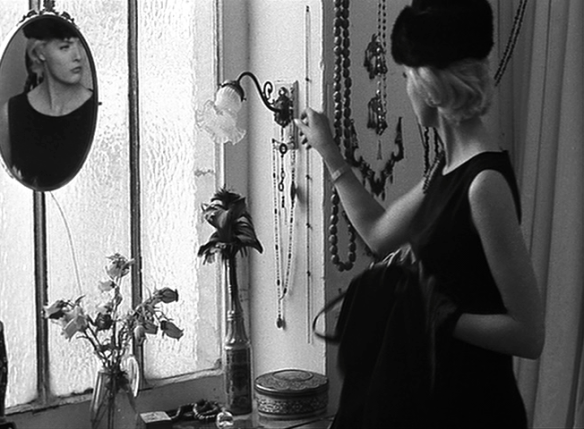 Agnés Varda’s 1962 film Cléo from 5 to 7 focuses on a beautiful, young singer during the two hours she’s waiting to hear whether she has cancer or not. She’s had her tests and the doctor said to call him at 7. How do you occupy yourself right before you’re going to get such a diagnosis?

Cléo first goes to a fortune teller. She gets her cards read, but the fortune teller gets upset when asked to read Cléo’s palm. Things do not look good. From there Cléo and her maid go shopping and we see how much more grounded and practical her maid is. Sure anyone would be on edge and jumpy at this time, but we figure, given her purchase of a winter fur hat, bought purely to annoy her maid, that Cléo is capricious.

The film made me sympathetic to Cléo. She’s a rising star, but she’s surrounded by men who have little time or respect for her. It’s not till she’s in a park right before 7 when she meets a fellow that she might be able to trust. Her maid and friend are reliable and trustworthy, but really, when you’re about to learn if you have terminal cancer, you are pretty alone.

There’s a lot of attention given to the strangers Cléo passes who’re living as if they have forever (though one stranger certainly does not). These little snippets of action and conversation spice and show what life really is like and how we aren’t the center of anyone’s drama.

The lead Corrine Marchard does a fine job as Cléo bringing her to life in a way that we see her as more than a dizzy singer with a bit of bad luck. Yes, she’s got privilege and doesn’t understand fully how much, but we still want to learn more and understand Cléo better.

The camera work in the film is inspired and masterful, creating a look that remains fresh today.

It’s Not the Time of My Life focuses on a married Hungarian couple whose son, Bruno is a little devil and not in a cute Dennis-the-Menace sort of way. Young Bruno’s obnoxious, anti-social and at times violent behavior is dividing the couple. As the wife E observes, they were able to be a good twosome, but as a family of three, they’re failing. Eszter is lenient and loving believing that employing the right contemporary child psychology is best for Bruno. Farkas, her husband, is going nuts with Bruno and believes some old school discipline is needed before Bruno grows into a teen who’s spending time in and out of jail. (I tended to agree with the dad.)

As if this weren’t enough, late one night,Eszter’s sister, Ernella, and brother in law Albert and their daughter Laura surprise them with an open-ended stay. They’d been living in Scotland and left so now they need a place to stay. E and Albert are unsuccessful and nomadic. They seem to go from failure to failure and often need money.

Both couples are questioning where their marriages are going and reflecting on how life has changed them.

The film is smart, emotional and at times intense at times depicting realistic couples questioning and confronting their problems. A lot is packed into the film, which makes for a steady pace. I also appreciated seeing a film set in modern Hungary. I’m afraid when I think of Hungry I think of the Cold War and poverty rather than yuppies barely coping with a boy who’d think nothing of burning the house down or one that’s discovered their sullen 10 year-old daughter has stolen as an attempt to help with the family’s money problems. The tone and look of the film is very natural and real making it very compelling.

What’s even more surprising is that the director stars as Farkas, he used his own apartment and family members for the film.

Sometimes it doesn’t seem like it but the new standard isn’t to just satisfy your customers, but to delight them. My Library UX instructor shared this new Delta 1980s inspired safety video that takes the bland message of airline safety and makes it fun, without compromising the information.

Here are a few other engaging airline safety videos. You can promote safety with humor just as Delta does. They weren’t the first though:

Upbeat safety message on a low cost Isreali airline. It sure grabbed my attention.

A flight of coffee-chocolate pancakes

If you’re a fan of breakfast or brunch, like I am, you must check out Orange. In Chicago they have several locations.

They’re famous for frushi, i.e. fruit sushi. So my friend Maryann and I ordered some. Just the right little taste of coconut milk infuses the rice which is topped with fruit. Cute, yummy and creative.

Feeling adventurous, I tried their pear cucumber juice. I liked it, but I doubt I’d order it again, well, not before I sampled some other combinations. The possibilities are almost endless. Mix and match orange, strawberry, pear, pineapple, watermelon, bananas and more.

Maryann was pleased with her rosemary infused French toast, which I was tempted to try. However, I went with the week’s pancake flight special: Coffee – Chocolate pancakes in four forms. One set had Kahlua, another chocolate chips. All were scrumptious and fun. Each week they announce a different flight of pancakes, which could be based on a theme like the Super Bowl this week.

Next time I go, I think I’ll try their Chai French Toast. Street parking’s easy to find. They’re open from 8 – 3, kind of late for a breakfast place, fine for me, but some early birds won’t wait.

“En Route” in Chicago. This looks like such a cool theatrical event. It began in Australia. It leads an individual through a mysterious, sensory experience downtown.