I watch this marvelous PBS concert every year. The tributes to individual members of the service and their spouses are outstanding and represent the many who sacrificed just as much. The music is superb and very fitting. The cast includes “Joe Mantegna and Mary McCormack and features an all-star lineup of actors and musicians along with top pops conductor Jack Everly and the National Symphony Orchestra.”

Take a look. Have some tissue handy as you may need to wipe away a tear. 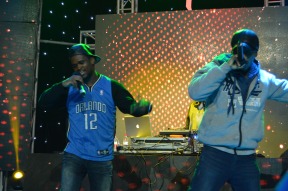 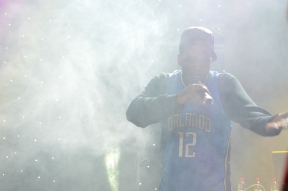 Never in a million years would I expect to go to a hip-hop concert with songs in French in China. Friday I did. My friend got free tickets from Alliance Française de Jinan. The concert was at a new bar down a street that you’d never expect to find a bar. It was a ramshackle street with old concrete apartments and the occasional dilapidated mom and pop general store. We were certain the cab driver was “taking us for a ride.” But he had the right place.

There was a big dance floor and stage with lots of lights and a fog machine. The crowd was much different than what I’d think you’d find in the US. Some families with kids, some college students, dressed very conservatively, a few French people and about two Chinese hip hop fans in tilted baseball caps and jackets with lots of “bling.” Even they didn’t go as far as the droopy jeans that show the world your underwear. 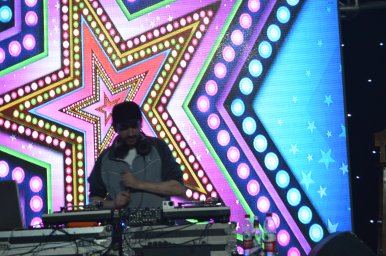 There were quite a few police in riot gear to keep this very placid crowd under control. They checked everyone for weapons with their hand held metal detectors. As this was probably the most family-friendly hip-hop audience ever this police work was unnecessary. (The tickets were free so I think people, like us, got them just as a cultural experience.)

The first act was from Africa and they were okay, nothing great. Who am I to judge, though?

Since all the songs were mainly in French I had no idea whether they were swearing or what.

The headliner, Webster, was from Canada. Evidently he’s famous. How would I know? He’s got a Facebook page and website, but doesn’t everyone? His music did have a good beat and he was very good at interacting with the crowd. He’s a historian as well as a hip-hop star so he wore an Oxford shirt as well as baggy pants. Very non-threatening.

What’s something you did outside your comfort zone? 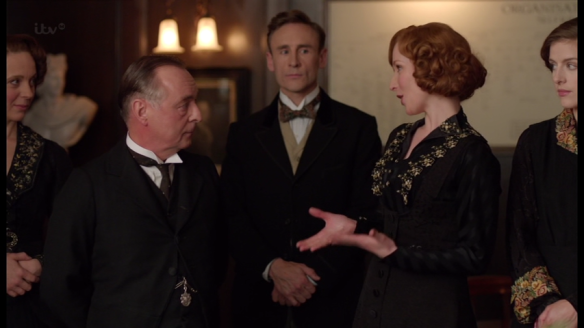 Kitty tells everyone how to do their job

The opening this Mr. Selfridge episode with the removal of all German products was a great way to show the patriotism and anti-German sentiment of the day.

Poor Franco, Victor’s dashing brother, got rejected when the brown-haired girl at the cosmetics counter wouldn’t go out with him because her father forbids her to date “foreign” men. Mind you Franco was born in Britain. Seems she could have been more diplomatic.

The weasel-y Thackery spies outside the store to see what Henri’s up to. He disapproves of Henri’s hat, a Hamburg, though we learn that during the war they were renamed. Agnes was still upset with Henri, who does owe her an apology for being so abrupt and rude the day before.

At home Harry finishes an early morning interview with his reporter friend Frank. Harry makes it clear that he disapproves of the U.S. profiting from war by selling to both the Germans and British. I do agree and didn’t realize we did that. We also learn from Rose that Americans are hurrying home to the U.S.

Gordon, who’s now promoted to the tea department, is getting friendly with Miss Calthorpe, the young lady who’s training him. They do make a good couple and he’s gallant enough to buy her sister a beautiful doll after remembering something she mentioned in passing.

In a department meeting Kitty manages to take a compliment and turn it around to put down all the other department heads. I enjoy her lack of self-knowledge and her usually harmless egotistical quips that just make her look silly in spite of herself. Miss Mardle’s heavy sigh said it all. I love how the shows humor surfaces from Kitty, Mr. Crabb and sometimes Mr. Grove’s little blunders. Harry shares a nice moment with Miss Mardle encouraging her to enjoy her money. Yes, live a little, Miss Mardle. “Your brother would have wanted it.” 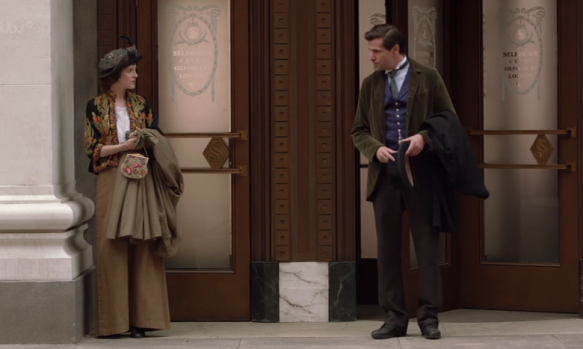