When icicles hang by the wall
And Dick the shepherd blows his nail
And Tom bears logs into the hall,
And milk comes frozen home in pail,
When blood is nipped, and ways be foul,
Then nightly sings the staring owl,
Tu-who! Tu-whit! Tu-who! – a merry note,
While greasy Joan doth keel the pot.

When all aloud the wind do blow,
And coughing drowns the parson’s saw,
And birds sit brooding in the snow,
And Marian’s nose looks red and raw
When roasted crabs hiss in the bowl,
Then nightly sings the staring owl,
Tu-who! Tu-whit! Tu-who! – a merry note,
While greasy Joan doth keel the pot.

For my online book club we read Romeo and Juliet, which my students are now reading as well. Once I get to Act 4, I want to just ask Friar Laurence why on earth he thought this plan with Juliet taking a sleeping drug would work. Why not tell her parents, Friar? Since she’s already consummated her marriage to Romeo, wouldn’t the Capulets and the Montagues have to make the best of things?

The Friar even tells Paris he doesn’t like the hasty marriage to Juliet. That’s a great start. Just tell the truth or if he’s such a coward, tell the parents they have to wait a certain amount of time after Tybalt’s death to marry. Then have them tell the truth. One of them would get the courage to.

I realize Shakespeare took the story from another source, a poem by Arthur Brooke and he saw that it had a lot of powerful elements, but there are some glaring mistakes in the plot.

What passing-bells for these who die as cattle?
— Only the monstrous anger of the guns.
Only the stuttering rifles’ rapid rattle
Can patter out their hasty orisons.
No mockeries now for them; no prayers nor bells;
Nor any voice of mourning save the choirs,—
The shrill, demented choirs of wailing shells;
And bugles calling for them from sad shires.

What candles may be held to speed them all?
Not in the hands of boys, but in their eyes
Shall shine the holy glimmers of goodbyes.
The pallor of girls’ brows shall be their pall;
Their flowers the tenderness of patient minds,
And each slow dusk a drawing-down of blinds.

If it weren’t for Theater Mania’s email offering 20% off tickets, I’d have never known that the National Theater Live was broadcasting Frankenstein with Benedict Cumberbatch and Jonny Lee Miller in Evanston. What Sherlock fan could pass up the deal?

The acting, sets and costumes were all outstanding. Last night we saw Cumberbatch as the Creature and Miller as Dr. Frankenstein. I’d caught bits and pieces of old Frankenstein films, which gave me an idea of what to expect. However, I didn’t know the movies departed from Mary Shelley‘s book.

Now I know why.

Despite a stellar performance by Cumberbatch and creative staging, the story fell short of what I’d expected.

The play opened with a scene, a protracted scene, of the Creature’s birth masterfully performed by Cumberbatch, yet the scene dragged. After a while, I was thinking, “We get it, the Creature’s gawky and learning to walk is a clumsy, long process. Can you please move on?” How I wished the director had made that more succinct. I also wondered why Frankenstein hadn’t heard all the banging about his creature was doing. Why did it take him so long to get into the lab to see what the hell was going on? We’re later told that Frankenstein was a workaholic, obsessed with his work. Well, not that night.

Once the creature’s born and walking, Frankenstein discovers him and he freaks out. As a result of Frankenstein’s screaming rejection, the Creature hits the road. Mind you all he’s wearing is a loin cloth and he knows nothing of life. He can barely walk and has no knowledge of language. He has no concept of geography, what a town or street is, what buying or begging is. Nothing at all. Nada.

After a minor run in with some scamps, the Creature meets an old man who’s blind and thus accepting. The man teaches the Creature to read and think critically. Pretty far fetched since a baby needs to hear language for years before talking let alone reading Paradise Lost passages. Yeah, I don’t blame the B movie directors for departing from this story.

While under the tutelage of the blind man, the Creature hides in the shadows fearing rejection and abuse from anyone who can see him.

Life is fine, though limited till the old man’s son and daughter-in-law panic when they first see the Creature. The man was so set on integrating the Creature into his family, yet didn’t have the sense to prepare them for this meeting. He’d been working with the Creature for a long, long time.

If he thought the Creature was hideous, why didn’t he scrap the project and start anew after taking some sewing and art lessons?

Throughout the play the Creature is a gawky biped with gruesome scars and bruises that never heal. It’s like Frankenstein sewed the Creature with his feet. I never understood how Frankenstein, who designed and made the creature was so repulsed.

The play deals (ineptly, I’d say) with themes of responsibility, connection, alienation, prejudice, but it’s all done with the sophistication of an 19 year old. I’m far less impressed with Shelley’s stature as a novelist if this is indeed the accurate retelling the play claims to be.

Frankenstein was the typical one dimensional scientist who’s anti-social and uncomfortable in society. He’s okay with theory, but horrible with real life. For some reason, his fiance is madly in love with him and keeps trying to get blood from the rock-like heart of this nerd dressed in ruffles.

The cost of Frankenstein’s misuse of science is death, several deaths.

While the play will be performed again in July with Cumberbatch and Miller changing roles, I couldn’t sit through the story again. I’m sure Cumberbatch would do an excellent job as Frankenstein, yet he’s limited by the poor story.

It’s weird to see so much good in a production and yet not be able to whole heartedly recommend it. I’d even give the set designers and actors awards, but I wouldn’t want to sit through this again.

Adapted from a George Eliot novel, the BBC production of Daniel Deronda will quench any Anglophile’s thirst for drama and romance. The series opens with a head strong, vivacious beauty, a Victorian Scarlett O’Hara, winning and quickly losing big at a German gaming table. It seems her laughing off the loss doesn’t ring true. Maybe she isn’t as well off as she appears.

Soon we learn the captivating woman is Gwendolyn, whose family isn’t well off (in fact they lose everything by the end of episode 1). The title character, Daniel, sees Gwendolyn lose all her winnings and as a professional guardian angel, retrieves the lost necklace Gwendolyn had to hock. While few words pass between the two, we can see that they’re both smitten.

Daniel has no idea who his real parents are. Most his life a rather stodgy, yet kind man has taken him in and acted as a father. He plays the part so well that most people assume the man is Daniel’s father. In any event Daniel has had the upbringing of a gentleman without the solid footing of one. Like any good hero, he’s very handsome and very kind.

One day he rescues a young woman, Mira, who tries to drown herself. He takes her to some friends and oversees her care and her budding singing career. There’s some warmth between Daniel and Mira, but it simmers in the first three episodes. They would make a good couple, but she is Jewish and while Daniel is open minded for the era, he doesn’t seem ready to chance marrying Mira. Still he doesn’t like it when his best friend expresses a desire to marry Mira either.

While Daniel and Mira are getting acquainted and Daniel’s helping Mira find her long lost relations and learning more and more about Jewish culture in a corner of Victorian England, I’ve never seen, Gwendolyn’s family has hit hard times. It’s impossible for them to keep her in silk and satin. (She always got the best horses, clothes, etc. while her non-blonde-haired siblings got table scraps it seems.) Her uncle can get her a position as a governess.

A governess? Are you kidding? Gwendolyn has always wanted the finer things and she’ll do anything to get them, anything including a cold man with money, whom she knows has neglected a mistress and three children.

The story is absorbing. The relationships are all in a knot and no one’s where they should be. To make matters more complicated, you have to ask yourself whether you’d root for Gwendolyn and Daniel since she’s so self-absorbed. The most redeeming aspect of Gwendolyn’s character is that she doesn’t pretend to be generous or kind. She’s quite open about her faults, which she sees as assets, rather like Cynthia in Wives and Daughters. If a villain knows her faults, she’s on the path to heroism.

After seeing Hugh Bonneville in Downton Abbey it’s hard to imagine him as a cad, or worse, but in Daniel Deronda he’s a scoundrel. He enjoys subjugating Gwendolyn and that is why he married this stunningly beautiful, albeit selfish and frivolous young woman. My, a lot of women need rescuing here and there’s only one Daniel in the village.

Thanks to Sheila being on the ball I got to see Sense and Sensibility at the Northlight Theater in Skokie. I’d never been to this theater and was impressed by the building. Yep, it’s a good professional level theater in the suburbs.

As for the play, it was a faithful adaptation with good acting, especially by the actors who played Marianne, Elinor and the mother Mrs. Henry Dashwood. The woman next to me kept saying that it was like watching paint dry. Far from it. I don’t think she appreciated the language, wit or era in which the story takes place. I found all delightful.

Now there were a few problems, but they were minor. There was no actress cast as Margaret and rather than just writing her out, they kept using exposition to explain where she was and she was always off stage involved in mischief. That just didn’t work. I liked the simple staging, but they were inconsistent about where the one door led to. Sometimes it led outside and sometimes it led to another part of a house.

I did wish that the teens in front of us had not used their cell phones to text each other during the play. They had no idea that people behind them could see the glow of the cells.

Still it was a good performance of a classic story. 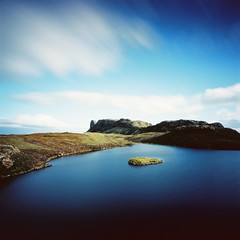