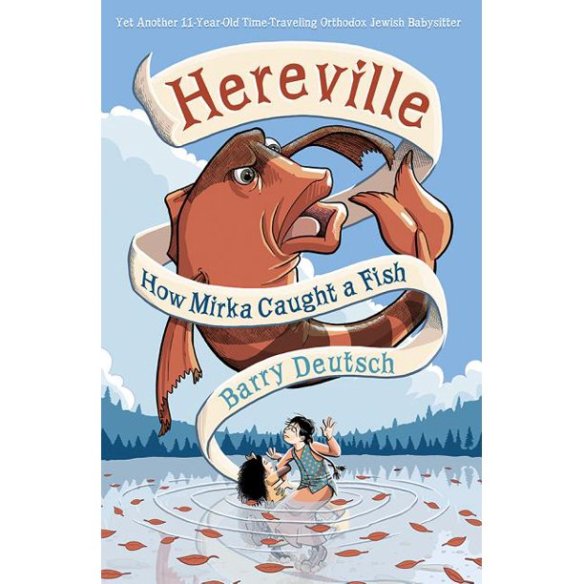 Another Mirka story by Barry Deutsche, Hereville: How Mirka Caught a Fish takes us back into the world of an Orthodox Jewish teen named Mirka. Smart and feisty, Mirka clashes with her stepmom. When she’s made to babysit her young half-sister, Mirka defies the rule that she shouldn’t go into the forest. She longs to experience the adventures her stepmother had as a girl. This adventure-seeker soon encounters trouble through a magic, or rather cursed talking fish, who soon kidnaps the little girl, making Mirka the “worst babysitter ever.”

The story is fun and wise. I enjoyed Mirka’s spirt and learning of the stepmom’s history. Surprising Furma, the stepmom grew up with a very modern mother, who’s something of a 1960’s hippy type.

The dialog is fresh and I like how authentic the story felt, in spite of a cursed fish that kept growing. I loved the glimpse into a different culture and all the Yiddish sprinkled into the dialog. (Deutsche provides definitions at the bottom of the page.) The stepmom isn’t perfect, but I liked how she spars with Mirka and makes the teen increase her understanding. Yes, the older generation has wisdom even feisty teens can’t refute. It would be easy to just show Mirka as always right and the rules of her community outdated. Instead, Deutsch points out how there’s wisdom in them.

1 thought on “Hereville: How Mirka Caught a Fish”