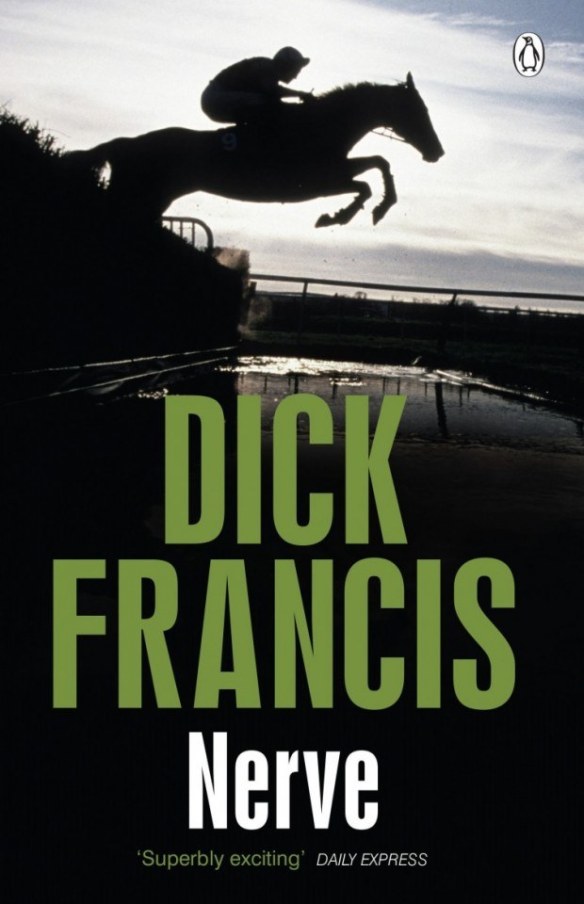 Dick Francis’ mysteries are all set in the world of horse racing and Nerve is no different. I read it for a mystery bookclub and was disappointed. While I liked the affable hero, Rob Finn, I expected a murder in this mystery and a faster pace.

Rob Finn’s a talented steeplechase jockey, he’s an outsider in his own family of talented musicians. Finn also gained a little of my sympathy as he’s hopelessly in love with his first cousin. Yet as much I’m a romantic and found the cousin Julia a wonderful woman, she was his first cousin. For me that’s too close to be sure of good genetics should a couple have children.

In Finn’s world several successful  jockeys have been fired, injured and in once case the victim of suicide. What’s going on? It seems coincidental until just when Finn’s career begins to take off and he’s featured on a popular racing TV program, Finn’s horses fail one after another. Soon he’s shunned and isn’t getting as many races. Finn doesn’t understand it but vows to figure out what’s really going on and to rescue his reputation.

I liked learning about the racing world and I liked the touch of romance, but Nerve lacked mystery and the writing wasn’t terrific. I found that I could skim paragraphs and not lose out much. That’s not a good sign. My favorite writers make me savor every word.