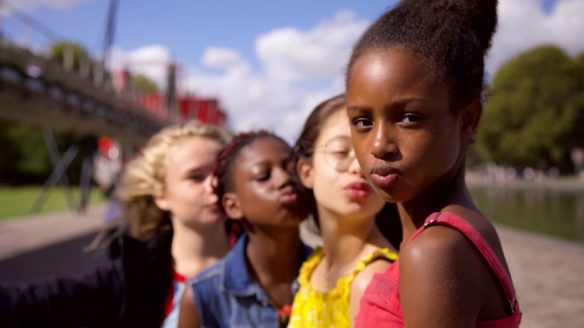 I don’t know the director’s intent, but Cuties, a French coming-of-age film, was sad and disturbing. The heroine, 11 year old Amy has come to Paris with her mom and two younger siblings. Her mother is devastated to learn that her husband, who’s still back in Senegal, has chosen a second wife. It hits Amy hard, but her reaction is far more self-destructive than she knows.

At her new school, Amy becomes obsessed with joining a mean girls clique, who’re preparing to dance in an upcoming competition. That sounds a bit harmless, though sacrificing your self-respect to befriend people who mock, humiliate and hit you, is not a good choice. I cringed when the girls kick out their lowest status member and Amy strives to get accepted by a group of misguided, powerful jerks.

Amy and her new “friends” get way over their heads in social media and sexy dancing. The camera draws the audiences’ attention to the girls’ bodies and movements that is gross and would only appeal to a pedophile. It’s really horrible and a far cry from a “feminist liberation” as the director claims. The director has recently claimed that the film is a critique on the exploitation of girls. I see it as more of a film about a degenerative society where parents neglect their children. The girls aren’t roped into anything, they just have no adult in their life who’s paying close attention to them.

By the end of the movie, Amy has stolen her cousin’s phone and over 500€ cash from her mother to buy lingerie, has posted photos of her genitalia online which angers her “pals” because that hurts all of the girls’ reputations, and stabs a classmate with a compass (used in geometry class). At the end, her performance insures the girls’ risqué dance won’t win. By the last scenes, it’s clear that this lost girl is stuck on a downward path. Her mother seems to have given up on Amy and it’s unclear where the girl will end up as there’s no adult in her life who’s committed to her success.

It’s a sad film because none of these girls have any guidance and not one of them decides to change course. None has a belief system, community, parent or mentor who offers direction.

I found the dancing and film as a whole hard to watch.

In short, Cuties was disturbing and sad. It may be realistic, but it’s also quite depressing. I’m not surprised thousands have canceled their Netflix subscriptions over this. The film exploits the young actresses. Anything for fame and fortune. O mores, o tempora!