Wim Wenders fascinated me with his Wings of Desire. This story of and angel, who wants to become human to experience human life is light on plot and on desire. Middle aged angel, Damiel slowly moves through Berlin, observing humans with compassion. At times he and his angel friend Cassiel do console or guard a frail human, but it’s with a light touch. Sometimes they succeed, but not always.

The film’s plot line is lax and the tone mellow. There’s no Hollywood hero with a high-level desire who speeds through the story facing obstacles till he wins in the end. Here a pensive angel wonders about humanity. A female trapeze artist catches his eye. He’d like to meet her, to woo her, but he lives in a different realm and faces few personal obstacles. Aristotle would have tightened things up, for sure. 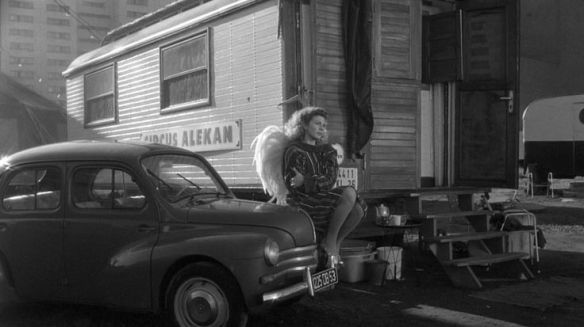 The film, which was produced without a script, captures all manner of emotions and small experiences. It delights with beautiful images and no over-the-top special effects. The effects are made as they would be in the 1920s with the camera used to its utmost. We’re won over with simplicity and that was a joy.

The angels could change at will and it wasn’t hard to do so. Peter Falk plays an actor whom Dameil meets now and then. It turns out Falk’s character is a former angel so he mentors Damiel a bit. Again everything’s done with a light touch and Wings of Desire is as much an homage to old Berlin as it is a story of an angel.

I watched while listening to Wim Wenders’ commentary which included some discussion with Peter Falk. Wenders talks at length about how he can’t film with a script and how he prefers the uncertainty of taking an idea and creating the story day by day. I can’t imagine a studio today to allow such a thing. Also Wenders commented on sights featured in the film and how they’ve disappeared or changed. His love for Berlin was deep and lasting.

I could see people who expect the usual obstacles and the usual ending to a romance to be disappointed, but I was willing to take in the gorgeous images and see where the film would go. So few films meander as much that I felt I could indulge Wenders.