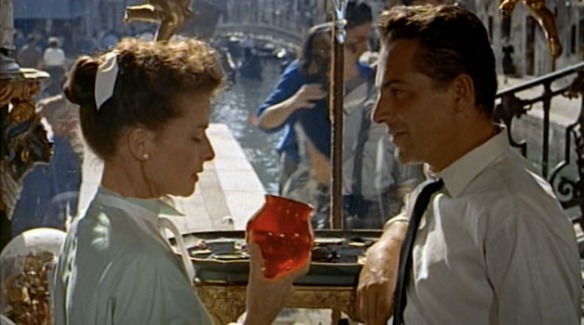 I was surprised that Katerine Hepburn could bore me. In Davide Lean’s Summertime (1955) she did. Hepburn plays Jane, an American secretary on her dream vacation in Venice. She’s dreamed of this trip for years and has a lot of energy and high expectations. Soon Jane’s pouting because her trip isn’t as idyllic as she hoped. She doesn’t have any horrible mishaps like getting robbed or sick so to me she just needed to look for some alternatives. Maybe she should go out for a day with the American couple who seemed a bit corny, maybe she should go to a different city or get a tour guide over the age of 10 instead of the urchin who looked about 6, had no shoes, spoke English better than a lot of Italian university students and who spoked cigarettes, which Jane gave him. (That was something you wouldn’t see today. Jane didn’t spoke on screen ever, but had a pack and bargained with this ragamuffin for.)

Jane does bump into an handsome Italian, Renato in the Saint Marco’s Square and the next day happens to go into Renato’s shop. There’s clearly some attraction, but Jane’s awfully standoffish despite her severe loneliness which makes it impossible to enjoy Italy.

About half of the film consists of Jane moping, which made it drag. Eventually, Renato pursues Jane, who soon discovers he’s married. At that revelation, Jane wants to end things, but she’s so lonely.

Jane had built this trip up in her mind so much that it was destined to disappoint. When she talks of home, it’s not as though she hates it. We’re not sure why she never married. She does mention going to a real ball as teen so she’s had opportunities for romance apparently.

Renato continues to pursue her and responds with pat answers to questions about his wife and children. Jane could do better. I hoped she’d end things with Renato.

All in all, I found the film dull despite Hepburn’s ability to be clever and energetic.